The push back over gender neutral pronouns: another absurd reason to divide us. 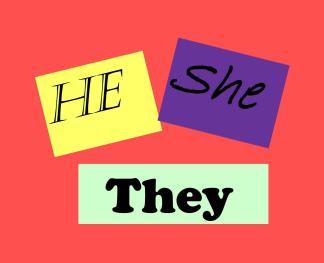 There’s been some discussion, and I dare say some push back around gender and gender-neutral pronouns lately. Notably, a University of Toronto professor who is generally admired has taken up the cause of fighting back against a students right to choose the pronouns used to address them. Jordan Peterson has been making the rounds in Ontario Universities to discuss a lot more than pronouns. He has been driven out by protests at McMaster and then hailed as a hero the very next day in a visit to Western University in the uber conservative London, Ontario. Who knew that an issue like pronouns would make a celebrity, both loved and reviled out of a man with some controversial ideas on the subject. It’s worth noting of course, that the man at the centre of this storm was born into a pronoun that happens to fit him. He does not carry the burden of having been born in the wrong body. He doesn’t live with the judgements and criticism that gender fluid and trans people face. He has never had to experience the troubling questions from people who insist on identifying him as one gender when he is another-or worse, who criticize him for amending that identity, insisting he needs to identify as the erroneous gender assigned in utero. He faces none of those issues and yet he has stepped up to speak to this issue as an expert.

Language is changing. The complexity of our understanding, awareness and language is changing quickly. And some of us are digging our heels in, declaring “this is where I draw the line”. “That’s just silly, why should we need to start changing the English language! What next? Soon we will have 500 names for types of people”

With any luck, that will happen.

When we dig our heels in, we are really saying “I’m not capable of understanding more than two categories. I am not ready to take my understanding of my fellow humans to a deeper capacity than that”.  It’s truly unfortunate given the scope of capabilities of our species. THIS is where we draw the line? War continues, poverty is flourishing, violence against each other is only escalating-and this is a sticking point? It’s positively primitive.

I imagine a time 200 years from now when our understanding of ourselves, and our worlds, and our moons and stars is significantly more advanced. I imagine the people and how they will reflect on “that time we thought there were only two types of humans”. It is with deeper understand of things like the gender and sexual spectrums (separately); the learning spectrum (the Autism spectrum included); the personality dimensions; and so many other factors that we begin to have a deeper sense of ourselves and even, our purpose. We will marvel about that time in history when we whined that we simply couldn’t bare anymore change. Not to our language. Not to our understanding. Millions of us just sat down on our hands in protest like toddlers, defying nap time. We were overwhelmed. It was just too much for us.

We pouted and refused to accept change.

We didn’t want to start the new school.

I hear you when you say “I just don’t wanna know what you do in your bedroom” (you really don’t, and we’ve no desire to share so you can let that go).

I hear you when you say “he or she should be enough. Just pick one. I won’t say ‘they'”.

What you miss is that it’s not an English game. It’s not an annoying poke to mess with you. In fact, it’s not even about you. It is a deeper understanding. An understanding of how we see each other, and of how we attempt to force others to see as we do. Expectation and imposition. Disappointment and domination. Why is it so hard for us to just learn something new?

Such fear of change we have. It is a deep fear. It is also deeply arrogant to assume some power over change. Change is a constant. And we are but small. We do not guide it, no matter how foolishly we cling to this idea. Remember when gay marriage rights were being debated and the crazies said “what next- we will have people marrying animals and children”? Well, this is that. It’s a ridiculous fear. A red herring. The refusal to acknowledge a shift in understanding, and acceptance, is still just fear. It rubs us the wrong way. Maybe it scares us. Mostly, it doesn’t even affect us. It does, however, make a world of difference for the person who has asked you to acknowledge this difference. This is not unlike the fight I’ve had with friends over “pansexual” vs “bisexual” and their absolute, steadfast refusal to understand the difference-which is actually very clear if you truly understand there are realities beyond cis-male and cis-female -to know there is a difference. (Dang it, we just got used to bisexual, we don’t want to accept there are more possibilities!). There have always been more possibilities. Let this not be the time we clung to our ignorance. The butterfly effect is strong around this issue. At a time when the United States is pushing back against the forward movement of trans rights and recongitions, and global violence against trans people is escalating (these events are not without connection), if you are stomping your foot about addressing someone in the way they have requested, then shame on you for your obstinate attitude.  You need only understand that a person who has braved the process of change from one outward gender appearance to another, sometimes doesn’t feel like they can fairly identify as either. If we are to stop forcing people to live with mis-assigned gender, we ought to allow them to drop the labels that pull them back. Frankly, it’s none of our business how people want to be identified, but it’s only courteous to respect it.

How could that be wrong?

One thought on “Language is evolving- Are you?”