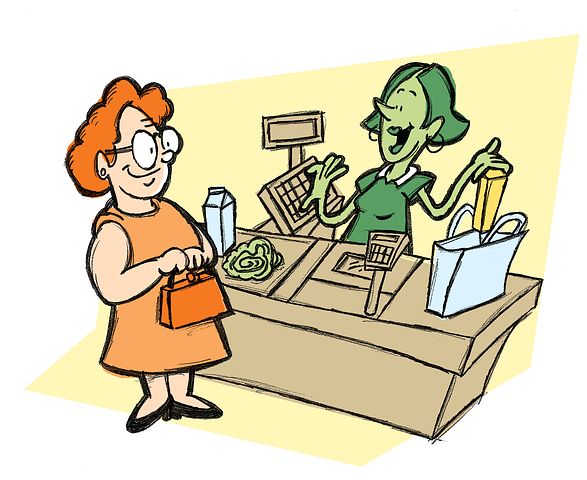 Yesterday I went into my local Shoppers Drug Mart. I shop there a lot. At least I did.

While it’s fairly obvious that a large percentage of consumers do not love the move to automation (there are entire social media campaigns about this!) the response to customer feedback has been mixed, to say the least. In the face of a growing movement of store patrons refusing to use self-checkouts, some retailers have responded swiftly, reducing or removing self-checkouts all together. My local Food Basics store recently renovated and removed about half the checkout lanes in favour of self-checkouts. They now have a cashier stand near the self-checkouts begging people to please use them. Hardly anyone does. Instead, we willingly wait longer to be served by the lone cashier who will still scan for you. One day there were 6 of us in this line. One person was using self-checkout and the employee tasked with convincing us stood uselessly by, apparently unable to jump on a check-out lane and assist her co-worker. Shoppers Drug Mart on the other hand has taken a different approach. Instead of meeting the customer in the middle, they have opted to raise the stakes: self-scan, or don’t shop. I want to state with emphasis what a poor plan this was, for a highly recognized chain with lengthy roots and history in Canada, to choose to force customers to adjust when they have clearly spoken. What Shopper’s doesn’t get is that we don’t HAVE to adjust. We don’t shop there out of necessity, we shop there out of loyalty. We CAN shop a million other places and get all the same options. Same products, similar (or better) prices. There are also other super-drug stores who have extended hours-including 24 hour grocery stores. Likewise, if Shopper’s is my only option to fill a late night prescription, I can still do this, get personal service at the back counter and walk-out without ever buying an impulse or additional item. We don’t need them. They need us. And this is why consumers speak with their dollars.

I lived in a border city between Ontario and Michigan for about 14 years. My consumer strategy benefitted chains like Shoppers Drug Mart because I refused to cross-border shop, even though 15 minutes of effort could’ve saved me a bundle by going to Kroeger (amongst many other options). My loyalty to the local economy kept me from taking advantage of the savings, and I rewarded the businesses who employed my fellow Canadians wth my customer loyalty (and dollars). Shoppers Drug Mart was always one of those businesses I chose to support.

Yesterday my son and I walked into a Shopper’s where we selected approximately $45 worth of merchandise. We approached the check-out. The woman in front of us was being directed to the self-checkout by the woman STANDING IN FRONT OF THE CASH REGISTER. She indicated she didn’t want to use the self-checkout at which point the cashier (with more than a little attitude) stepped out from behind her register exasperated and stated that she would “help” her use the self-checkout (that’s right, she refused to serve her on the machine she was literally standing in front of). At this point she advised me over her shoulder that if I was using debit or credit (I was) that I could proceed to the next self-checkout. I stated that I would prefer not to use the machine. She rolled her eyes. We waited. Once she had finished serving the customer before us, she came to the second self-checkout and started scanning. After two of the 12 items she said “I’m sure you can get the hang of this now right?” I replied “it’s not that I don’t know how it works. It’s that I don’t want to use a self-checkout. I prefer the human service. Is there a reason you are not allowed to use the regular checkout when requested?”

*Daggers from the cashier*

“You have to call Head Office and ask them. They want people using self-checkout”. She was not polite about it, either. She had clearly recited this answer over, and over, and over. While I personally cannot understand this Cashiers refusal to defend her own job, I was truly shocked at the message to self-scan or nothing. Let me be very clear here, while my focus is very much about supporting jobs and keeping them in Canada, this is far from the only reason to keep live cashiers. First of all, accessibility is the law in Ontario. The Accessibility for Ontarians With Disabilities Act (AODA) dictates that services must be offered in such a way that barriered people can access them. Forcing people to use technology is simply not an accessible measure for so many reasons, not the least of which is that it forces people to disclose reasons why they cannot use it in an environment that isn’t confidential or private-and nobody should have to. Accessibility isn’t about finding one method and forcing everyone to use it, it’s about accommodating multiple methods so that one is available to support the customer. The customer should not have to announce in line that they have a literacy issue, or a grasp problem, or a visual impairment or any of the multiples reasons why self-scanning is not a viable option. A customer with an intellectual disability who may not be able to manage this process is apt to be completely embarrassed by the forceful direction to use self-checkouts. Many people, myself included, will simply not return to the store in question when their choices and accessibility are being limited. There’s an even bigger reason for stores to reconsider their stance on forced-self-checkouts though. People want and need human interaction. Many seniors and persons with disabilities live in relative isolation and the brief interaction at the check-out might be all the human interaction they have that day. Some may even find a reason to go to the store just to have a bit of human contact. You take away that reason, and they simply won’t come. You jeopardize all the years of brand development and customer loyalty by mocking the customer for their choice.

Think that using a self-checkout means savings? Think again. The annual cost of groceries for the average family is higher than ever. Either prices are rising or product size is shrinking (have you noticed the size of a package of bacon has shrunk by about 125 g for a majority of brands?) and zero savings have been passed along to the loyal customer. Groceries for the 2019 year are expected to cost an average of $—— more per year than in 2018, which already saw a record high. In a time when the retail industry is already threatened by online product sales, chains like Shoppers Drug Mart should pay extra attention to the customers who still choose to walk in the store, and who are asking you nicely, to bring a little humanity into the customer experience. There’s already nobody available to help you find a product. The cashier was the last holdout of actual customer service. My family can live without Shoppers Drug Mart. We can live without Food Basics. These retailers would be wise to take note that much of their competition has taken a different stand, by committing to removing or limiting self-checkouts and respecting the customer history that results in loyalty.

Occasionally,  I hear someone say that they “have to bag the groceries anyway so what does it matter”. I would ask these shoppers to be a little more honest about their choices. You choose the self-checkout because it’s faster, and for you, that matters more than jobs. That’s the bottom line. Some of these very people lament job losses and our shattered economy and seek someone to blame. While you’re saving five minutes at the grocery store perhaps you can use that time to reflect on your choices. The reality is that if you asked the store to bag your groceries for you, they would. If many people asked, we would see the return of grocery baggers in most grocery stores. I shop at Zehr’s and 70% of the time, they bag them for me. (It’s worth mentioning that Zehr’s is also part of the Shoppers Drug Mart group of companies). When the day comes that they try to force me to self-scan my groceries, I simply won’t shop there anymore. There will always be businesses smart enough to cash in on the human factor that people are asking for. I will shop in those stores!

Sorry Shopper’s but you have missed the mark entirely. I won’t be bullied to pay more money for less service. I’ll go elsewhere instead. I thank you for teaching my teenaged son a valuable lesson about consumerism-even at 18 he was horrified by your tactics.